Journey off the beaten path through Peru's cities and towns on this 10-day itinerary. You'll have opportunities to mix, mingle and perform with the locals. Highlights include excursions to Macchu Picchu, Huaro, Chinceros, Juliaca and Taquile Island! 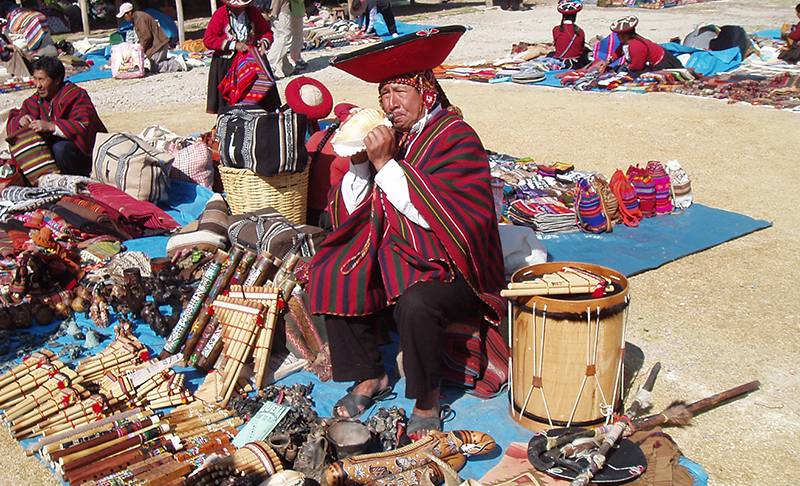 Depart from the USA. Arrive in Lima, Peru's capital city. Meet your Tour Manager and transfer to your hotel for an arrival briefing and dinner.

After breakfast, provided each morning of your tour, you will enjoy free time at your leisure to explore. In the early afternoon, join a local guide for sightseeing including the Government Palace, Municipal Hall, San Francisco Church and Desamparados. The Cathedral is one of the most emblematic places of Lima. This gem of colonial architecture preserves its unique and irreplaceable works of art, many of them considered among the oldest in the city. There is a museum of religious art, wonderful altarpieces developed between the seventeenth and nineteenth centuries, exceptional choir stalls and a crypt where many of the archbishops of Lima are buried. In one of its chapels, finely decorated with Venetian mosaics, rests the remains of the Marquis Don Francisco Pizarro, the conqueror of Peru and founder of the "City of Kings" as they called Lima in colonial times. The San Francisco Convent is noted for its 17th century architecture, a high example of Spanish Neoclassicism. Catacombs are built under the monastery, and are said to connect to other catacombs beneath the cathedral and other churches. Today you will perform your first concert!

After breakfast, depart for an early morning flight to Cuzco, the historic capital of the Inca empire. On arrival, transfer to the hotel for some time to freshen up. Use the free afternoon to acclimatize to the altitude. Tonight, you will have a dinner show at a local restaurant.

This morning, join a local guide for a tour of Cuzco including Warrior's Square, the Cathedral and the Koricancha. Cuzco was the capital of the Inca Empire and, according to the legend, the city was built by Inca Pachacuti, who transformed Cuzco from a sleepy city-state into the vast empire of Tahuantinsuyu. The first Spaniards arrived in 1533, and undertook the construction of a new city on the foundations of the old Inca city, replacing temples with churches and palaces with mansions for the conquerors. Koricancha, also known as the "Temple of the Sun", is one of the most important of Inca temples. Originally a temple of the Killki culture, its walls served as the foundation for the construction of the Convento de Santo Domingo. In the afternoon, prepare for your second concert this evening followed by a group dinner!

Today enjoy a full day of exploration to the resplendent valley believed to be the birthplace of the Inca Empire. Begin with a trip to the sacred valley to see the salt mines of Maras and the nearby Incan circular terraces of Moray. In the afternoon, you will transfer to Chincheros, a village located 30 km from Cuzco with an altitude of 3,672m. It is surrounded by perpetually snow-capped peaks. At a very colorful Sunday fair in the main square, the indigenous people trade by barter as they did in olden times. Tradition is also maintained in the dress of the residents and the profile presented by the site, which includes the walls of an Inca fortress and palace, all of which gives the town a unique charm. Lunch will be provided today at a restaurant in the sacred valley. Today you will perform at a local venue! Return to your hotel in Cuzco for dinner and the night.

Today is your full day excursion to Machu Picchu! Machu Picchu was never discovered by the Spaniards. For centuries it was buried in the jungle until Hiram Bingham found it in 1911.The Holy City of Machu Picchu was built in stone among the flanks of two hills belonging to the eastern mountain range of the Andes, descending into the Amazonian upper sylvan. There is no doubt that Machu Picchu represents an extraordinary example of architecture and engineering. Upon arrival at the station, buses wait to transfer you to the top of the ruins (30 minutes). A guided tour of the ruins gives you some idea of what the city must have looked like. Return to the hotel for dinner and the night.

Today, travel by private coach to Juliaca, with historical and archaeological stops on the way. You may stop in Huaro, a charming village, where wizards used to live during the Inca period. In Huaro, there is a magnificent colonial temple with mural paintings of Tadeo Escalante (1803), one of the last masters of the Academy of Cuzco. Continue on to Raqch'i. Built in the fifteenth century, it is considered to be one of the most audacious Inca constructions. The remarkable Wiracocha temple is built on top of volcanic stone foundations. The complex also includes a residential area made for the Inca nobles and dozens of circular warehouses to store food. An informal concert may be possible here. Arrive, check-in and have dinner at the hotel.

Travel on Lake Titicaca by boat this morning, making stops at Taquile Island and the Uros Islands, small floating islands made of packed totora reeds. Continue to Taquile Island. During the Colonial period and up to the first years of the twentieth century, it was used as a political prison, until the island became property of the Taquile people in 1970. The town of the same name, Taquile, is characterized by its friendly inhabitants, who maintain their customs and traditional clothing. Here, you will perform your final concert! Return to Puno and enjoy dinner as a group to celebrate your successful performance tour of Peru.

Explore our catalog of Peru's most popular performance venues.